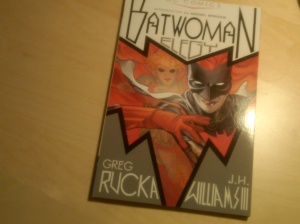 This story reflects the true essence of dating a nerd. As you know from my last post I went to see The Dark Knight Rises, which according to Spike and Cracked.com is not considered nerdy anymore. This post involves what happened after the movie…my boyfriend handed me a comic book, “Batwoman: Elegy”. Some girls get chocolates and flowers….

If you are dating a nerd, especially a comic book nerd like Cyclops you are going to run the risk of having them present you with comics to read. I understand that you want your significant other to understand the things you love but he doesn’t seem interested in my love of the film Magic Mike. In short, I’m just not sure I’m a comic book girl.

Are there any other normal girls out there that have found themselves in this situation? Even better if anyone has any thoughts on this specific comic.

Of course because I am an awesome girlfriend I am going to read the comic…eventually. At that point if this blog is still in existence and I haven’t retired to a tropical island somewhere I will post a review on it.