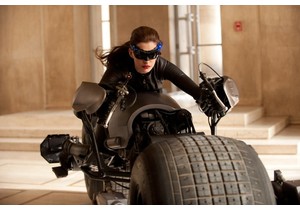 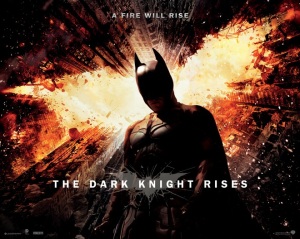 Apologies for being the worst blogger ever, it has been 2 days since a post, but truthfully I haven’t been thrown into any “nerdy” situations and I don’t want to fabricate a story just to fill space. But luckily Cyclops has helped me rectify this situation by taking me to see The Dark Knight Rises last night!

I won’t get into a lengthy review of the film because I’m sure that there are media professionals out there who can do a much better job than myself dissecting the approximately 3hr film with talk of cinematography, special effects and underlying themes. But I will give you a quick rundown of what I thought.

Let me preface this by saying that for some reason I wasn’t all that excited about this movie, I can’t put my finger on why but I didn’t feel the need to run and stand in line to see the final chapter in the Batman trilogy. That being said I throughly enjoyed it! WARNING, there may be some spoilers ahead.

CHARACTERS: In the promos they should have just said, “featuring every Actor/Actress in Hollywood” or at least  Batman featuring “the cast of Inception”.

Batman: Pretty awesome even with the totally groan worthy “Batman voice” that Christian Bale does. Except Bruce Wayne sucks at keeping secrets because it seemed like everyone knew he was Batman.

Bane: Eh as a villain, but I wasn’t expecting him to top Heath Ledger (tear) and his portrayal as the Joker. What was AMAZING about Bane was his voice, which was most of the time hard to understand but at all times sounds like a Sean Connery impersonation, very similar to the Venture Brothers character Colonel Horace Gentleman, https://www.youtube.com/watch?v=6mHvSg5qEvw. But note to producers, you shouldn’t hire someone with a face that cute and then hide it the entire movie.

Catwoman: Personally I loved Anne Hathaway as this character, she was a great mix of sarcastic, sexy and kick ass. I think when the inevitable bad idea arises in Hollywood of doing a Catwoman reboot that she will be great. Plus as I mentioned in my Twitter post last night I need her Catwoman high heels stat!! Watch out anyone who tries to mug me in Downtown LA, I will roundhouse kick you to the face.

Alfred & Fox: Love them both as always!

Commissioner Gordon: He is by far my favorite character in the entire series, and he did not disappoint in the final chapter. Love the bromance between him and Batman.

Joseph Gordon-Levitt (whose character name I can’t remember) & Miranda Tate: Both great especially Levitt. Levitt’s character is the best detective ever though since he apparently  figured out the identity of Batman as a boy just by seeing a look on Bruce Wayne’s face. The one big issue I had with the Miranda character is that I didn’t quite understand how her and Bruce were suddenly an item. They don’t even know each other and then Batman is risking everything to save her. But it didn’t bother me enough to not enjoy the rest of the movie.

PLOT: While this is definitely a character driven film (and why wouldn’t it be with so many great actors) the story itself also delivered in an entertaining way with some great twists and some interesting final scenes. All in all a great final (?) chapter in the Christopher Nolan Batman series.