If you have just walked into the room or closet of the guy you’re dating and are confused by the fact that he has dozens of bins filled with building blocks carefully organized by color and shape, don’t be alarmed….you are dating an AFOL, that’s right an Adult Fan of LEGO.

This term refers to adult hobbyists who build or collect LEGO bricks. The term was coined in 1995 and since then the AFOL community has built a strong following. My quick search on the term AFOL led me to sites like LUGNET and BrickJournal where fans can talk about all things LEGO. These fans can also attend BrickCon held every year in Seattle. So if you’re dating an AFOL I suggest you buy some rain boots and book your tickets to this year’s convention October 4-7. 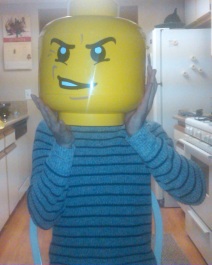 Cyclops is not only a fan, he LOVES LEGO. The amount of money he spends at the LEGO Store (using his LEGO VIP Card of course) buying sets, minifigures and bricks boggles my mind. Due to his love of LEGO his Christmas present last year was a giant LEGO head and he had a LEGO birthday celebration with a LEGO cake and a trip to LEGOLAND. If your boyfriend is an AFOL watch out because guess who’s getting pulled into this hobby, that’s right you are. You will be getting LEGO presents, baking LEGO cakes and going to an amusement park designed for children…but more on that later.

I will leave you contemplating the fact that your boyfriend is an AFOL with this documentary courtesy of director Jess Gibson.

AFOL A Blocumentary from AFOL on Vimeo.