Picture this; You are chatting up a cute guy at a party/bar and a frightening thought enters your mind, “Could this guy be a nerd?” Maybe you aren’t ready to take on the role of a normal girl dating a nerd like Ashely and I have and we completely understand that…it’s a hard road to go down. You have to prepare yourself to hear a lot of talk about things you know nothing (and probably care nothing) about like MTG and MLPFIM and not everyone wants to take on that responsibility.

Readers you are in luck, we are here to help and relay to you some telltale signs of a nerd from head to toe. DISCLAIMER: This is based mostly on the LA nerd, your nerd may vary.

1. Take a look at his shoes, are they Converses?

In my opinion Converse has become the unofficial brand of nerd footwear. I think if you pointed a camera directly at the foot traffic at Comic-Con about 95% of those in attendance were wearing these shoes. My nerd in particular is very fond of these, he has them in various colors and I’m not kidding I went shopping with him to get some “dressy Converses” that he could wear with khakis. I don’t really get the attraction, for me Converses aren’t that comfortable but maybe my feet just aren’t made for them.

2. Is he wearing a t-shirt? Is there some reference to a super hero on that shirt or perhaps a reference that you don’t understand?

Nerds wear t-shirts like the ones below to signal to others of their kind. Before I came into the picture and starting making Cyclops go out into the world I’m not sure he owned a non graphic t-shirt. Here’s a hint: I would say the more obvious the graphic on the t-shirt the more nerdy the guy you are talking to is, so if there is a huge graphic of The Avengers, then you might want to run away. 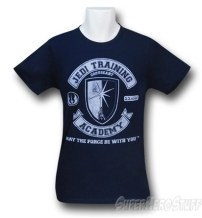 3. Is he wearing a blazer, button up shirt or hoodie over that t-shirt?

I have found that nerds are all about layers. Depending on the type of bar or party you are at, nerds will be wearing 1 of 3 things; a hoodie, button up shirt or a blazer. Again maybe this is just a LA nerd thing but it’s totally acceptable, cool even, for a guy to rock a converse, jeans, super hero t-shirt and blazer look.

4. Does he have a general look of unease about him?

As any nerd will tell you certain types of social interactions are stressful and unwanted. Anyplace that features large groups of people, dancing, or hard core drinking, nerds will be scarce (unless surrounded only by other nerds). They would rather be discussing Batman vs. Superman one on one with you or playing D&D at their house.

There you have it, next time you find yourself in this situation ask yourself these 4 questions and you can avoid the perils of dating a nerd.