We Date Nerds readers, I apologize that this post did not go up on Friday or at least this weekend. I’m a little behind in my TV watching and had to deal with some unfortunate car issues. But without further ado, I now present my very late review of Elementary as previewed in my Fall 2012 Nerd Shows.

If there’s one thing CBS does well (and it’s not streaming their content online) it’s the procedural crime show. Need proof? Take a look at the most watched TV program in the country, hint it’s NCIS. We all have our favorite cop shows whether it be NCIS, The Mentalist or Law and Order: SVU, this country just can’t get enough. So the question is, did Elementary provide a fresh take on the procedural or was it just another detective show?

We open with your typical procedural set up, a angled shot of someone getting attacked and possibly murdered.

It’s 7:00AM and Lucy Liu gets up to go on a run, I immediately feel really lazy because she’s running super early and in the cold. Turns out she’s just gearing up for her new job, as a sober companion to one Sherlock Holmes, who just broke out of rehab. Her job is to follow Holmes around and make sure he doesn’t use again, (is it just me or does being a sober companion sound lame?) As a former consultant for Scotland Yard, Holmes decides that his post rehab routine will involve becoming a consultant for the NYPD. Here’s a quick recap on our main characters thus far: 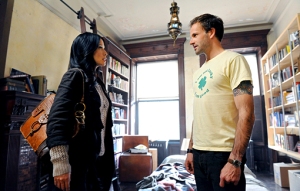 SHERLOCK HOLMES: Recovering drug addict just out of rehab. A former consultant at Scotland Yard. Went through something difficult in London which sent him on a downward spiral with drugs and alcohol. Is very tatted up and wears shirts that say things like “I’m Not Lucky I’m Good.” (not sure how I feel about that, Holmes seems like he should be a little more dignified). I do love Johnny Lee Miller with a British accent (or I guess his real accent) and I like that he admitted to using Google, “not everything is deducible”. He is a typical guy with no furniture but multiple TVs. Best part about Holmes is that he also thinks baseball is boring. He also has a charming way of referring to things by their British terms (kinda like Ziva in NCIS always messing up American phrases) for example:

JOAN WATSON: Hard to read. Former surgeon. Has some demons to face. Sees pretty easily through Holmes and calls him out on all his shit. Not my favorite character so far but I do like that with this re-imagining of Sherlock Holmes, Watson gets to not only be smart but to have that whole woman’s intuition thing going on like when she immediately knows that Holmes issues in London stemmed from a woman.

CAPTAIN GREGSON: Detective at the NYPD. Worked with Holmes at Scotland Yard. Seems to put up with Holmes’ shenanigans.  If I keep watching I think I’m going to like him, which means they will probably kill him off soon.

SPOILER ALERT (but not really because this is a procedural crime drama): Ultimately Holmes with a lot of help from Watson solve the case and nail the killer and they both seem to settle into their new routine as crime solving partners.

While I love the cast and find this Americanized version of Sherlock Holmes with the added male / female dynamic intriguing, I’m not sure that Elementary provided a fresh enough take on your typical detective show to hook me. It kinda just feels like they  just took your basic “who done it” detective show and threw in Sherlock Holmes to help it stand out. Maybe the show will find it’s groove and capitalize on the talent they have assembled but not sure I will be tuning back in.

Do sober companions live with you? That could either be super awesome or super horrible depending on who the patient is…

Does anyone feel like there is something off about the Holmes / Watson dynamic?  I’m all for the male / female friendship but I kinda miss the bromance action that you get in other versions (BBC anyone?)

BEST QUOTES OF THE EPISODE:

– “What about the mask?” “Was it ski, mexican wrestling, paper plate?”

– “Sssh yourself, it’s not even on key” (while at the opera)