Last night was the Arrow premiere! As I mentioned in my Fall Nerd Show 2012 Preview this is a show that I was very excited about, superhero + angst + hot guy = WINNING!

I could hardly contain my excitement sitting down in front of the TV, with my “TV time partner” in crime Marshall (my roommate’s cat) as Arrow began.

We open with some interesting camera work, I’m feeling a little bit of motion sickness but luckily that effect doesn’t last. A very rugged looking guy in a green hoodie is running around the jungle/forest, swinging from trees, climbing up rocks and racing towards something. SIDE NOTE: He is running barefoot, his feet must be ridiculous… 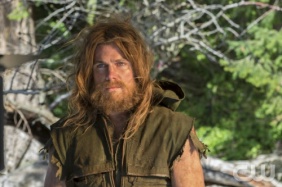 As he’s running around I’m starting to get little bit of a Robin Hood vibe, and I think we all know I like that. He has spotted a ship out in the ocean and in a few seconds it’s clear that he’s been planning his escape for a while. One shot from his bow and lit arrow and a giant bonfire explodes signaling the ship that someone needs help on the island, I like it a man with a plan. Turns out he’s been stranded on this island for 5 years! SIDE NOTE: He seems to have fared better than Tom Hanks in Cast Away, I mean he’s not talking to a volleyball so that’s a plus.

We then get introduced to our castaway, Oliver Queen. It’s clear that the island has changed him, made him stronger in order to survive. He has a mission, “I am returning not the boy who was shipwrecked but the man that will bring justice to those who have poisoned my city.” And a superhero is born! CUE INTENSE MUSIC INTRO.

This really has nothing to do with the plot but I think I can tell I’m going to like this show because the News broadcast revealing Oliver’s return is hosting some of the most ridiculous fonts I have ever seen all together in one place. Also I do NOT care for the photo they are showing of him (pre-shipwreck), go back to Robin Hood mode.

BACKSTORY ALERT: Oliver was considered dead after going missing in the shipwreck of The Queen’s Gambit which also claimed the life of his father Robert Queen. Before the ship went down Oliver was a notorious partier and playboy.

Cut to a hospital scene, as the doctor speaks to Oliver’s mother about his injuries, which seems to have been intense; scars, burns and broken bones.

The Mom seems shady, if I had been missing for 5 years I think my mom would act a little more excited and less hesitant about my return.

I lied, screw the pre-shipwreck look and the Robin Hood castaway look…post shipwreck clean cut look for the win!

Turns out the Queen family lives in a freaking castle! And with Patrick Stewart….oh wait no that’s just a black British guy who sounds like Captain Picard.

Walter Steele: Black British guy who sounds like Patrick Stewart. Used to work with Oliver’s father and for some reason is at the Queen residence when Oliver returns.

Thea Queen: Oliver’s 17 year old sister. They seem to have a deep bond but I’m guessing the 5 years that Oliver was away have changed Thea as well. By the way, the CW is so incestuous, his sister is from Gossip Girl, Agnes anyone?

Laurel Lance: Speaking on incestuous relationships Laurel is also from Gossip Girl. Anyways an up and coming lawyer who is trying to take down all the bad guys in the city. Turns out her sister, Sarah Lance was also on the Queen’s Gambit and she does not seem happy about Oliver’s return.

FLASHBACK ALERT: Back on the Queen’s Gambit, we see that Oliver and Sarah were having a little tryst before the ship went down.

Tommy Merlyn: Best friend of Oliver and the obvious comic relief of the show, I like him already. Love his synopsis of the past 5 years for Oliver, “What else did you miss? Last 5 superbowl winners, Giants, Steelers, Saints, Packers, Giants again, black president that’s new and Lost they were all dead, I think.”

First laugh out loud (LOL) moment. Oliver calls out Walter Steele at dinner for wanting to sleep with his mother. Turns out Walter and mommy dearest are married.

FLASHBACK ALERT: Back on the boat it’s clear that Sarah should not be getting it on with Oliver. But all of the sudden the boat goes under and Sarah gets sucked into the churning ocean. Oliver looks for her in vain and is eventually pulled aboard a life raft with his father and an unknown dude.

Under his bed Oliver is hiding a mysterious box, which seems to hold his bow and arrow and hooded costume. I guess my biggest question is where did he get that box while stranded on an island?

Like a good best friend Tommy is ready to take Oliver out on the town but the only thing he wants to do is see Laurel, SWOON!

The reunion does NOT go well because as predicted Oliver and Sarah were up to no good on that boat, it appears that Oliver was technically dating Laurel at the time, ouch. It’s hard to be mad at your sister and boyfriend for cheating when they are both considered dead.

On the way back to the car after the failed reunion Oliver and Tommy are hijacked and kidnapped.

FLASHBACK ALERT: Oliver, his Dad and unknown dude in a liferaft. Father confesses that he is not the man Oliver thinks he is.

The masked kidnappers want to know what Oliver’s father told him, they don’t get the information they seek because Oliver is bad ass, gets out of his restraints and takes them all out. Before he kills the last thug he says that “nobody can know his secret.” What does that mean?!

SIDE NOTE: Is this guy doing his own stunts? If so he’s pretty hard core.

Back at the Queen castle the police are questioning Oliver and Tommy about what happened. Oliver concocts a story about a man in a green hood swooping in to save them. Tommy can’t corroborate the story because he was passed out but I can tell by the look in his eyes that he knows something is up with his BFF. The detective on the case seems to have some previous beef with Oliver, hopefully there is more on that later.

And thus the tale of a green hooded man begins.

The next day Oliver is pouring over a journal. There are a list of names in the book, seems very Revenge like right now. He grabs his gear and starts to head out, unfortunately due to his kidnapping attempt his mother has hired a bodyguard, John Diggle, to accompany him everywhere, this is definitely not going to work. As they are driving Oliver ditches Diggle by jumping out of the moving car.

Oliver is off to build a secret lair in the old Queen Enterprises warehouse space. I don’t want to hear anyone complaining about not being able to work out in their space, he’s hanging from the freaking pipes to do crunches. Anyways somehow (because he’s rich and this is a TV show) he is able to construct what appears to be a functioning, technologically sophisticated hideout in less than a day. Plus he shows off his badass archery skills.

We are introduced to our first villain, his name is Adam Hunt and I have forgotten what his crimes were, but it’s the same guy Laurel was trying to take down through legal channels. Question, how does Hunt not recognize him?

He and his henchmen are attacked by the hooded man in green. He lets Hunt know that unless he deposits $10 million into a specific bank account by 10pm the next day that he would come take the money another way. The next day Hunt immediately lets cops (same detectives from earlier) know about the hooded man and hatch a plan to catch him.

You’ve comeback from the dead, what’s the first thing you do? Throw a massive party, obviously! Tommy puts together a huge shindig for Oliver which just happens to be just across the street from Hunt’s office, coincidence, I think not.

Laurel shows up at the party and it’s clear that she wants to mend their relationship, at least to friends and try and heal together. It’s clear that Oliver loves her but pulls the typical superhero move and lies to her, making it clear that he’s still the same playboy he once was and he would just hurt her again.

The clock strikes 10 and no money is in the account. Oliver springs into action, but not before once again having to ditch Diggle again (I feel like this is going to be a running gag) and easily takes down Hunt’s men.

Anyways, Hunt escapes as the cops come running in, but Oliver has thought ahead, jumps out the window and ziplines down to the building across the street (which if you don’t remember is where he’s having his welcome home party).

The cops raid the party and a confrontation goes down between the detective and Oliver (who is back to his clean cut self, no green hoodie or face paint in sight), turns out the detective is Laurel and Sarah’s father, AWKWARD! No wonder he hates Oliver so much.

Using a electronic arrow that he left in Hunt’s office Oliver is able to take $40 million from Hunt Enterprises and give it to all the people that Hunt cheated. Even more like Robin Hood.

FINAL FLASHBACK ALERT: Back in the lifeboat the three survivors are barely hanging on. The elder Queen realizes that not all of them are going to survive, and he chooses Oliver as the survivor. He takes out the other dude and then shoots himself. Damn this is heavy stuff.

Oh man turns out Laurel and Tommy have a little thing going on, hmmm, how’s that going to play out?

Back at the castle here’s what goes down:

Henchman: “The police failed to identity the man I hired to kidnap Oliver, should I arrange another abduction.”

Moira (Oliver’s mother): “No there are other ways of finding out what my son knows.” KNEW IT!!! The mother is EVIL, EVIL!

THE END at least for this week.

Overall I thought this was a great pilot. It had the right mix of backstory, mystery and fun and plus Arrow is dreamy so can’t beat that. I think the characters are a good mix of serious but likable. I’m excited that this is a superhero story that hasn’t been overdone so the story can unfold as a surprise.

Plus with all the ruining people and crossing them off a list, it seems to have a bit of a Revenge feel to it, which is my mind is an added bonus.

BEST QUOTES OF THE NIGHT:

Tommy: “A rock how sweet, I want a t-shirt that says, my friend was a castaway and I’ll I got was this crappy shirt”

Tommy: “Have you noticed how hot your sister has got?…cuz I have not”

Russian housekeeper: “You are different, not like you to read the book”

Detective Lance: “We’ll put out an APB out on Robin Hood”

Biggest lie of the night from Oliver: “I missed tequila!”

Tommy: “By my calculations you have not had sex in 1,839 days” only a best friend would do that math for you.

Tommy: “The chick that looks like Twilight”
Oliver: “What’s Twilight?”
Tommy: “You’re so better off not knowing”