Welcome back lovers of Arrow. It’s been a long few weeks but hopefully this video of Stephen Amell gave you a little bit of an Arrow fix. Trying out a new recap style this week, we’ll see how it goes.

Before I get into it, the opening scene had a hilarious bummer sticker than I need to get a fireman friend of mine….On a firetruck it said “Stay safe at night. Sleep with a fireman.” DYING!

THE QUEEN FAMILY
All is not well in the Queen household. Walter has been gone for 6 weeks with no word (thanks to Moria) and she is not taking it well. The family is starting to think that Walter is done for. You know things are bad when Thea’s suggestion that Walter is having a midlife crisis, ran off with a stewardess and is too embarrassed to call is the preferred scenario. Queen Consolidated is also suffering from the loss of their second CEO and Moira is urged to take over which she does NOT want to do. Thea comes to the rescue and with some fighting words gets Moria to snap out of it, leave the house and take Walter’s position at the company. Moria does promise Thea and Oliver that she will find Walter (you know where he is!)

#VIGILANTEPROBLEMS AKA CRIME OF THE WEEK
Someone is taking out firefighters in Starling City and disguising the murders as on the job accidents. One of the victims is the brother of Laurel’s BFF and coworker, Jo (unnamed until now). Jo is convinced that the death if her brother was no accident and discovers some inconsistencies on the accident report. Laurel wanting to help her friend, contacts The Hood using the phone (which she snatches from her dad) that Oliver gave Detective Lance in the last episode and asks for help. This phone shall know be known as “the Arrow signal.” 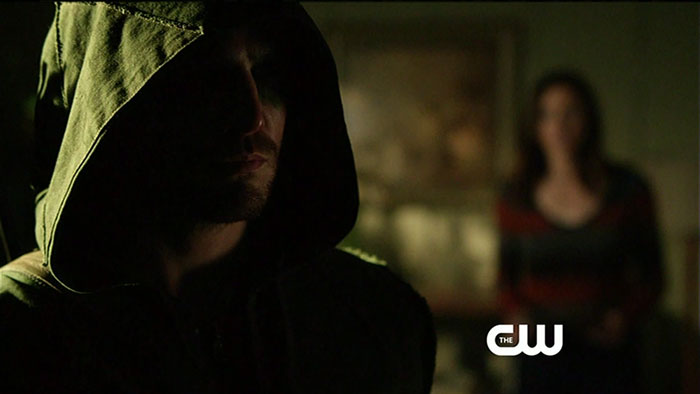 When the next big fire strikes Oliver heads off in his first appearance as The Hood since his accident to see what’s been going down, but he is too late the killer takes out another victim. He and Oliver come to blows and Oliver is not his usual badass self, it’s obvious his last turn as The Hood is messing with him. But he does catch a glimpse of the killer’s tattoo (a firefly) and a scar. He relays the info to Laurel, basically passing off responsibility. Dig calls him on it and tells him that he needs to get over the fear the other archer put into him.

After a little more digging Laurel uncovers that Jo’s brother was part of a group of firefighters that called themselves the “fireflies”. The fireflies were in a bad fire years ago due to faulty construction at a building and one of them, Garfield Lynns, died. And the guys that have died since then due to these “accidents” were in the same unit.

Inspired by Laurel’s continued efforts, Oliver does a little more digging and discovers that the body of the man that was killed, Garfield Lynns, was never found and puts the pieces together, he is the killer.

At a firefighter’s relief benefit thrown by Tommy and Oliver at the site of the future nightclub, Lynns shows up and sets fire to the building.

Luckily Dig and Tommy are able to get everyone out while Oliver slips away to grab his gear. Just as Lynns is about to take out the one man he felt was responsible for his lot in life, The Hood jumps into action with a sweet shot involving a lighter and it’s clear HE’S BACK!

Oliver tries to convince Lynns to get help but instead he walks into the fire to die once again. In the aftermath, The Hood is being hailed as a savior and Jo asks Laurel to get him her brother’s badge somehow because in her mind he is a true hero.

OLIVER
I must say that the people behind Arrow rewarded viewers who suffered through this long hiatus with an abundance of shirtless scenes tonight, including a very long opening workout / rehab sequence.

Anyways I digress. Oliver has been out of the game for 6 weeks and is using Walter’s disappearance as the excuse to postpone getting back to the list but it’s clear the other Archer really did a number on him. After the fire incident Dig calls him on his fear and Oliver confesses that he is scared because as opposed to his life on the island now he has something to lose. The ever wise Dig reminds him that he actually has more of and edge because he has something to lose. By the end of the episode Oliver is back and ready to go hunting!

ON THE ISLAND
If you don’t recall we last left Oliver on the island running from some scary henchman as his buddy with the arrows got captured. After running for a while one of the henchman catches up to him and they get into a brawl, which Oliver wins. Oliver takes the gear off the guy for himself and discovers some valuable treasures in the pockets, keys and a map.

Laurel and Oliver Run-In Of The Week

It wouldn’t be an Arrow episode without a Laurel and Oliver run-in. This week it’s outside the firehouse and they have a heart to heart about relationships and why their fears and feelings drove them apart. Then of course Oliver saves Laurel from the crazed pyromaniac (which she doesn’t know about).

Laurel and Tommy have been going strong for the past 6 weeks and are really too cute. The writers are making it really hard for me to decide which couple to root for. Tommy is becoming way more responsible and thriving in his new job managing the club (or managing the construction of the club). There is one point of contention for the couple this week, Tommy wants a drawer. Laurel is hesitant because in the past she has jumped head first into relationships and been burned….way to go Oliver!

Detective Lance leaves “the Arrow signal” with Laurel. Then we find out he had the phone bugged. Now anytime she calls The Hood he can hear every word they say. Bugging your own daughter, that’s cold man!

BEST QUOTES / MOMENTS OF THE NIGHT

Tommy: “Ironically if we get any more people in here and were going to violate the fire code.”

Thea and her impersonation of Walter: “Moira, put on some pants, we are going to lunch”.

Oliver to Tommy: “Where’s the guy that rented out a football stadium so he could play strip kickball with supermodels?”

A great episode back for Arrow. Can’t wait to see what the rest of the season holds. And I need Walter and his Bristishness back stat!