Alright readers I admit that was a little bit of a misleading title because the wedding I’m referring to is not between Cyclops and myself…it’s between Ashley and Spike.

For those of you who don’t know Ashley and Spike’s relationship helped inspire this blog so we consider them part of the We Date Nerds family.

On Valentine’s Day Spike popped the question and now they have a wedding to plan. More than the ceremony itself or the party afterwards (which I’m sure will be epic) I think that I’m mostly going to enjoy the back and forth between them on all the details, because it’s only been a few days but I have already been witness to arguments surrounding the rings and the location which all seem to center around nerd suggestions.

For example, Spike wants to get some sort of “nerd” wedding ring, possibly with some Lord of the Rings symbolism or to purchase their wedding bands at the upcoming Renaissance Faire…both ideas were denied within seconds of being uttered. 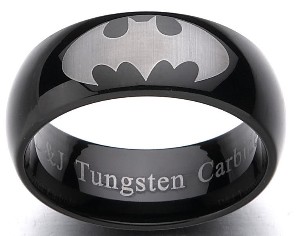 Then Cyclops jokingly brought up having the ceremony at Comic-Con and I thought Ashley might blow a gasket. Here’s the deal fellas, if your fiance needs to plan a wedding in 9 months then you DO NOT joke about things like that. Anyways I think that this wedding going to bring with it a lot of fun and hilarity and I’m hoping Ashely will write a few posts for us along the way sharing her struggles with marrying a nerd.

3 thoughts on “BIG NEWS! A We Date Nerds Wedding Is Coming!”